Raw Eggs are Not That Great for Bodybuilding

When looking for natural alternatives to protein powders and meat one will often find oneself looking to dairy and eggs.  One might even find that oneself has watched a popular movie, perhaps “Rocky”, or even in the innocence of youth has seen Gaston explaining the source and origins of his abnormal size:

When I was a lad I ate four dozen eggs
Ev’ry morning to help me get large
And now that I’m grown I eat five dozen eggs
So I’m roughly the size of a barge! 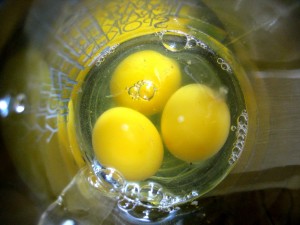 The clip shows clearly that the eggs were probably raw, or at least very runny, when Gaston’s little helper, Le Fou, attempts to catch several eggs in his own mouth, in imitation of his larger and more talented friend, but catches them instead on his face and shoulders.  The eggs shatter and white and yellow liquid splatters and oozes onto his clothing.  But raw egg whites are clear, one might counter, but remember that it is just a cartoon, and the artists often times will favor familiarity and ease of identification over realism.  If the whites had been drawn a milky clear the animation would have been much more challenging, and the audience would perhaps have been distracted, wondering why they had parted from the normal cartoon egg conventionality.

Supposing then that a person had been so influenced by either of these movies or by something else, that person might go about trying to eat raw eggs in order to gain muscle mass.  I am writing this article to tell that person the results of his egg consumption before he even attempts it.

The truth is that raw eggs are not that great for bodybuilding.  They are great for general health, and should be eaten occasionally, but as a source for building muscle, there are alternatives that will satisfy your muscles’ nutritional needs more directly.

The greatest chemical need for building muscle is protein.  If you look on the nutritional information panel in your carton of large sized eggs you will see that one egg has 6 grams of protein.  Unfortunately for raw egg enthusiasts, the raw version of the egg, though containing 6 grams of protein, is only 51% bioavailable to humans, so the enthusiast will only actually use about 3 grams of protein per egg.  That means a dozen raw eggs will only give his body 36 grams of protein, which isn’t nearly as much as his body needs after a good workout (generally at least 1 gram protein per pound of bodyweight is accepted as acceptable).  A cooked egg’s protein, however, is 91% bioavailable (ref).

Both raw and cooked eggs are very high in fat and cholesterol.  While there have apparently been no studies that prove a link between dietary cholesterol and heart cholesterol (ref), one might be concerned that a dozen eggs, containing a mere 36g of bioavailable protein, will give you at the same time 840% of the government’s recommended daily value of cholesterol.

Raw eggs, especially yokes, are packed with vitamins, like a living multi-vitamin, and contain A, D, E, Riboflavin, B6, B12, Folate, and some other ones you probably wouldn’t recognize.  They also have many minerals, such as Calcium, Phosphorus, Magnesium, and many others.  Cooked eggs have all these as well, as you can see by comparing this and this, but the argument is that the heat from cooking destroys the structure of the minerals and vitamins such that they are less useful to your body.  The protein bioavailability, however, seems to show that it can go either way.

That is precisely why I like to rely so much on my own subjective experience with ingesting a particular food to find out if it is really good and useful.  I use the nutrition facts to guide my experiments, but the only way to really tell is to try it and to form a perfectly accurate opinion of the food.

On the first day I ate about 9 raw eggs throughout, always mixed with a little not-from-concentrate pasteurized orange juice, for taste.  After finishing each drink I felt what can only be described as an earthy intellectual clarity in my mind and body.  I was able to think deeply and it seemed as though my senses were really sensing what they ought, not clogged by a foggy nervous system.  I really enjoyed drinking them for that reason.  I did feel a little satisfied with the protein aspect–when I had come home from a hard workout and I drank three of them, it seemed to satisfy my sore muscles a little, but not nearly as quickly or completely as drinking a cup of raw milk.

I continued eating raw eggs at about 6 per day, three in the morning and three after the workout, and they continued to give me their pleasant nutritional sensations.  They did not, however, give me any increased energy or power during the strenuous “Elite-Fitness” workouts, and I found that the large amounts of cholesterol seemed to hang heavily and stickily in my chest.  I felt somewhat sluggish, as was reflected in my mediocre performances in “Elite-Fitness”.

By the end of my experience, which only lasted a few days, I had eaten two dozen raw eggs, had grown smarter due to increased mental clarity, had remained neutral in my workouts, and had lost a little weight.  I eventually gave up and ate full-fat yogurt for the rest of the week, until I finally was able to purchase some raw milk, which I will praise in a separate article.

Conclusion of the Matter

In conclusion, I recommend eating one or two raw eggs a day, or less.  Don’t try to get buff by eating raw eggs, but rather eat them as if they were a natural vitamin and health enhancer.