I’m not the best boxer in the world.  You won’t see my name on the list of world champions anytime soon.  Really, I mostly box to get a good workout and because its fun to punch things.  I’m not a career boxer, so I didn’t want to have career boxer hands.

I used to use the Harbinger Wrist-Wrap Leather Bag Gloves.  They were built very well but had thin padding.  At first they were all I needed, but as I got stronger the pain of impact in my knuckles held me back from punching very hard.  My knuckles would end up red and swollen at the end of every session, and they were beginning to lose their dexterity.

I will use my puffy Everlast Sparring/Bag gloves, I said to myself, and I meant it.  With those, I was able to punch twice as hard.  But Everlast gloves, at least their Level 1 gloves, are not meant for actually punching anything very hard, and soon the padding over the knuckles lost its enthusiasm for battle and fled to other parts of the glove.

Now what do I do? I wondered.  I have destroyed the utility of my Everlast gloves in only a few sessions.  Then I reached down to my pocket and felt my wallet.  It wasn’t empty.  This wallet has at least ten tens in it, I said.  I’ll find the best bag gloves that money can buy for under $100, and then my knuckles won’t become arthritic. 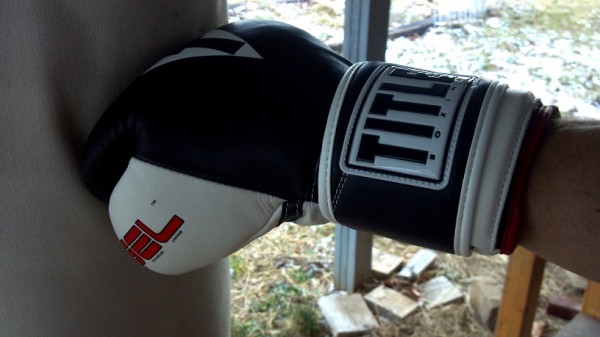 I searched high and low, deep and wide, macro and micro, through forums and amazon reviews as thick as a jungle.  I narrowed it down to these two gloves:

I almost bought the latter, but as I was reaching for my credit card, I happened upon a forum post that denounced the current rendition of the Ringside gloves as being manufactured very poorly in Pakistan.  The old gloves manufactured in China were perfect, the poster said in his own way, but the new ones are poor construction, with bad stitching, etc, not just for this pair, but for the replacement I requested, too.  Its more current reviews on Amazon confirm this. 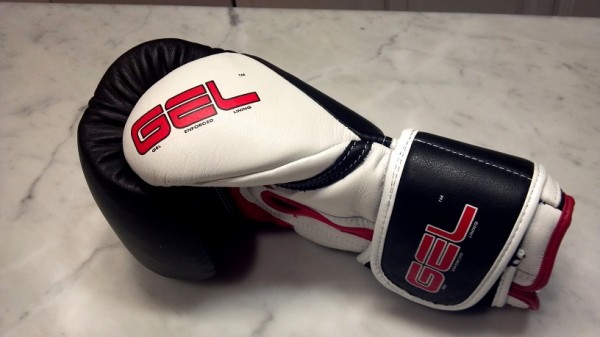 It seems like something that belongs behind a protective glass at a museum.

Alright, I said, I have to buy the former.  I went to Title’s website and was searching to buy the “Title GEL World Bag Gloves,” but then I noticed the Title GEL Intense Bag Gloves, for only $10 more.  They were both on sale, but the World gloves were normally $99, and the Intense gloves were normally $189.  The Intense must be better, I thought, and I was probably right.  I found a pair on Amazon on sale for only $80 with free shipping, so I let them know my credit card’s secret and access its hidden bounty, and in return I got the nicest pair of gloves I will probably ever own. 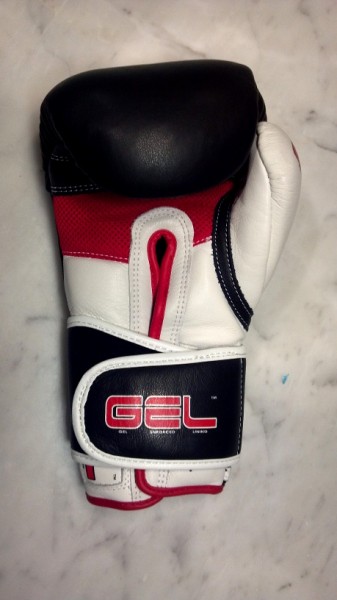 Is this an oil painting of an idealized glove? No, it is the real thing, and it is ideal.

The first thing you will notice after you order and receive your own pair of these gloves in the mail is their impeccable quality and construction.  Every stitch is tight and in its perfect place.  The leather is straight from a cow whose hide has never been scratched by a stick.  The colors, red, black, and white, are a reminiscent mixture of patriotism and the dark professional boxing world.  These are Intense, you will say.  Then, when you put them on your hands, you will notice just how easily the slitted opening parts to receive your wrapped hand.  You will tighten the wrist strap, which wraps all the way around the wrist before latching via hook-and-loop (a.k.a. Velcro).  You will easily put on the other glove, and will still be able to tighten and close the strap, even with the limited dexterity of your gloved hand.

Then, good boxing person, you will punch.  You will punch the bag harder than you have ever punched it, and your knuckles will know no pain.  If anything, you’ll strain your shoulders or pull your pectoral muscle, or you will crack a tooth from the jolt of impact.  But your knuckles will be at peace, and in 30 years from now, when you are old and hunched, you will still be able to play the piano and draw little pictures for your swarming grand children.

What else can be said of these gloves?  They are very well padded with gel, the wrist strap is very effective and doesn’t come off accidentally, the inner lining is comfortable and durable, and they look great. 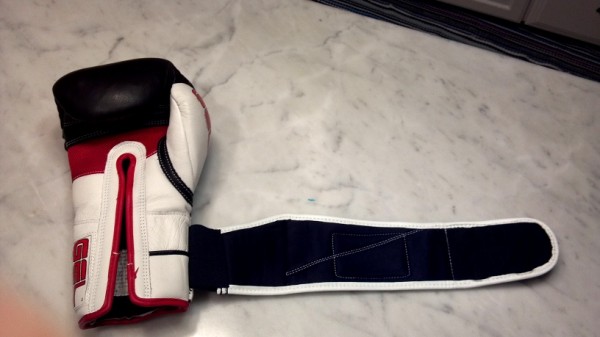 The wrist strap wraps entirely around like the caring arms of a mother her child.

Some people say that the World bag gloves are imbalanced, but I find the Intense to be balanced well.

Some say the thumbs are bad in the World gloves.  The thumbs on the Intense are comfortable, though occasionally I cram my fingernail into the end of them if I’m not careful.  But what would you have them do? Make a thumb that is too big and gets in the way? No, thank you, I’ll take the thumb just how it is.

Some people say they weigh too much.  Well, they do weigh more than they specify, but you’ll get used to it, and you’ll get a much better workout that way, and when you switch to your little sparring gloves, you’ll be so much faster.

Some people say they are not so good for sparring, even if they do come with little wraps that cover the velcro so that you can spar.  I’d have to agree with those people on that point.  I wouldn’t want to get hit with these.  They are pretty dense, and, as we have already said, the wearer will be hitting twice as hard.

I have three things to say:

I would get them from Amazon, since it’s cheaper than getting them through Title’s website, yet either will ship from Title.