I recently received a Double Under Jumprope from a nice company in the UK named Double Under Jump Rope (doubleunderjumprope.com).  At first I was not actually skeptical because both the company and the product were named after the very action for which the product is intended, and I doubted anyone would be so bold and fail to deliver.

In order to keep things interesting, I often like to tell a story about myself; this article does nothing to reduce how “often” I tell a story, and, in fact, will only solidify that description.

One day I was given a very nice Rogue speed rope.  I had high hopes, but for some people it’s just very difficult to control a jump rope that is so light and fast that you can barely tell where it is except by the whirring sound around your head, or by its viperous sting in your arm or thigh when it suddenly transfers most of its kinetic energy into a small line of your flesh.

The only jump rope that I can consistently double-under with is a rather heavy one.  Unfortunately my shoulders tire very fast and I’m ready to expel the contents of my stomach if I do very many with it.

There must be a happy medium somewhere, mustn’t there?  A rope that is fast, yet controllable, and doesn’t tire out your arms?

Yes, there is, and it has an easy-to-remember name:

The Double Under Jumprope

The Double Under Jumprope from Double Under Jumprope is a very solid and well-built little rope.  It has hollow handles made of high quality plastic.  Each handle is attached to a swivel at the top, through which the wire is threaded.  There’s a little screw thing on each side so you can adjust the length of the rope evenly.  The one I got came with enough length for Goliath to use, so I had to chop it down a bit with some wire cutters.  There are little soft caps that you can put over each end of the wire so it doesn’t poke you. 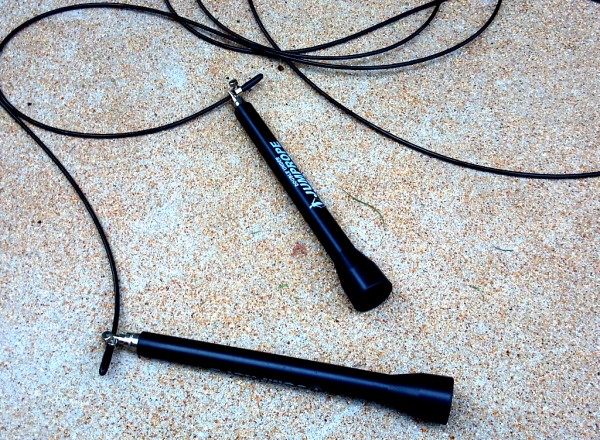 Once I finally stopped doing double-unders and put down my rope, this is what I saw.

Using the Double Under Rope

I found the Double Under Rope to be much more controllable than the Rogue rope or any other little plastic speed rope that I’ve used before.  The wire is a little heavier than others that I’ve used, and it is not as stiff, so it has a much nicer feel.  It’s also much easier to wrap up into loops for storage.

While I myself have not become totally proficient at doing double unders with this rope (or with any others), other people who have tried it have experienced an almost miraculous transformation in their double-undering abilities, so it’s worth a try.  It is much easier to use than other little speed ropes.

In my opinion, this rope is great for beginners and everybody up to competition level.  If you own a box, you might consider populating your jump rope rack with them.  They will last a long time, are easy to adjust, and are probably the easiest fast ropes for people to use.  You can order one from the Double Under Jump Rope Website.  Even though they ship from UK, if you live in America it will still get here pretty fast.