Famous Barefoot Runners and What They Didn't Do

It is easy enough to find out what a famous person has done. It is harder to find out exactly what they have not done.  Is this laziness on the part of the creators, the shapers of thought, the authors of the world?  There are certainly more things that a person has not done than he has done, and, I admit, the task of comprehensively presenting the things someone has not done is formidable.

In the case of famous barefoot runners the task is particularly difficult.  Of course, there is the obvious: they did not wear shoes when running, but coming to that conclusion is trivial for anyone who is past kindergarten.  Typically, runners do a lot of running, both in races and just for training.  Generally you don’t hear much about things that they did besides running, I think because their lives were otherwise dull and uneventful.  I run, they tell the world, and they do run, and they win prizes and get paid for interviews and little speeches, but that’s about it.  This leaves a lot of room for things that they did not do.

We’re going to take a look now at three famous barefoot runners and I’ll try to just give you a survey of things they did not do.  Sometimes I might be tricky and say the converse of something they did do, but hopefully I’ll stick with the meat-and-potatoes of some big things they never did. 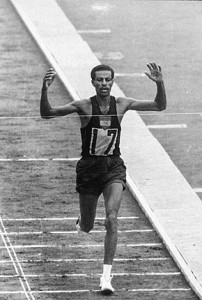 This was not a race during which he did not wear shoes.

He also did not escape his VW Beetle’s car wreck without injury in 1969.  After that car crash he did not walk on his legs.  He did not use any part of his body after his cerebral hemorrhage in 1973, which was not unrelated to his car crash.

Although he did not run barefoot in the 1964 Olympics, he did not normally train wearing shoes.  In the 1968 Olympics he did not get past mile 17 of the marathon because during his training a few days before while running without shoes the state of one of the bones in his foot changed such that it was no longer unbroken.

Now let’s talk specifically about some things he did not do.  He never drank or even tasted Crystal Clear sodas, like Crystal Clear Coke or Crystal Clear Pepsi.  They were blatantly inferior sodas, lacking the depth of flavor of their darker counterparts.  Nevertheless, for some reason in the early 90’s clear soft drinks became very popular.  Companies like Coca-Cola and Pepsi solicited and received endorsements from several sports stars and athletes.  Although Abebe Bikila was a well-known Olympic medal winner and runner, he never sold out or gave his endorsement to any of these clear “fad” sodas. 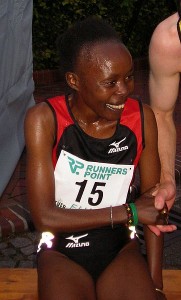 There are fewer things that she has not done.

Tegla Chepkite Loroupe was not born in any country other than Kenya.  She did not wear shoes for many of her races, including ones in 1998 and some other year.  She has not run only a few races in her lifetime, nor has she neglected to become involved in humanitarian movements that promote world peace and women’s rights.

Of the barefoot runners, Mrs. Loroupe is the easiest, because there are not too many things that she has not done.  I mean, there are still a lot, but less than the other two.  Just to name a few things, though, I have to bring up the important point that she did not take part in America’s Civil War and was not routing for either side.  Remember, she is from Kenya, and although she is not un-involved in the affairs of the United Nations, she was not involved in that war.  She did not, I say with sorrow, even aid the Americans during the Revolutionary War, when we were outnumbered by the invasive and oppressive British empire.  In Vietnam she was never drafted, nor did she even fill out a draft card, even though she was not in college at the time.  Many brave men have fought and died for the Freedom we have in America, but not Tegla Loroupe. 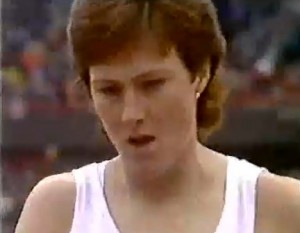 This is not Zola Budd.

Zola Budd is not excluded from the list of barefoot runners because she actually did not usually run wearing shoes.  There are several videos of her on youtube that show this.  Unless they have all been digitally edited to remove her shoes, it appears to be absolutely true that she did not run with shoes at least some of the time.

I don’t know, I think instead of telling you more stuff like how she didn’t go through life without winning a race, I ought to tell you some more important facts.  She did not discover a cure for cancer, or, if she did, she has not made it publicly known.  Or, if she has tried to make it publicly known, she has not been successful.  She has also never discovered a cure for AIDS, or at least has not succeeded in popularizing the cure.  Despite being alive for several years on this earth, she has never managed to get everybody to co-exist peacefully.  Rather, it seems like every day we hear about some new crime that happens on the earth, and there’s Zola Budd, unable to prevent it.  Often times it’s nice to have someone say something kind to you to boost your self-esteem and help you push on through the day, but Zola Budd has never spoken a kind word to me, even on the days when I really needed encouragement.

I know there’s still a lot more to cover about what these three didn’t do.  The subject really deserves more research and dedication than I am able to give it, but my hope is that this brief survey will light a spark in some young author who will be able to cover more thoroughly everything these three barefoot runners did not accomplish.