Tecnu Extreme Poison Ivy Scrub Does What it Does

As I write this article I am under the influence of Prednisone, a prescription steroid which inhibits auto-immune inflammation.  One of the side effects of Prednisone is sleep-disorder.  It seems to inhibit a deep and satisfying sleep.  It also makes the thoughts quite shallow.  The sentences short.  The bad grammar.  It also makes me angry, at least for the first couple of days, but then I become too tired and dull-witted to yell at or rebuke anyone, so I become just listless. 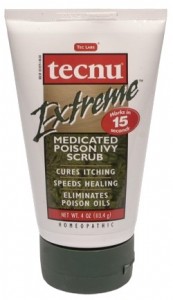 I do not like to take Prednisone.  I do not like to be in the “Sone”. The last time the oils of Poison Ivy covered my body and I stepped into the Sone I decided that next time I had poison ivy I would try something else.  Someone told me about a new product that would eliminate my poison ivy.  I was so excited that I did some research and posted a status update on my personal Facebook account:

The next time I get a case of poison ivy, oak, or sumac, I’m trying Tecnu Extreme, the extreme itch relief solution from Tec Labs. Tecnu Extreme Medicated Poison Ivy Scrub actually cleanses the urushiol that is bound to the skin, eliminating the source of the rash, and relieves itching with a natural homeopathic ingredient. Buy it now at Walgreens for $14.99.

For $13 I purchased the stuff from Walmart and waited, almost eagerly, almost carelessly, for the urushiol oils of that hated plant to cling once more to my skin.  I was confident that Tecnu Extreme Poison Ivy Scrub would be able to easily handle the rash and clear out the oils immediately.

The time finally came about 10 days ago.  Doing some yard work, I contracted poison ivy all over my arms and legs.  The blanket of oil was thick and strong, and seeped into my skin.  I wasn’t worried, because I knew that Tecnu Extreme Poison Ivy Scrub had micro beads that would scrape away the upper layer of my skin and allow the urushiol binding chemicals to find their targets and carry them down the sink.

I did not start scrubbing myself with Tecnu Extreme until the rashes were clearly visible, because I was not sure that I had actually contracted poison ivy rash.  If I had used Tecnu Extreme within an hour of my exposure I am sure it would have cleared away everything.  Rubbing alcohol will also clear away the oils, if applied within an hour or two after exposure.

I applied Tecnu Extreme Poison Ivy Scrub to the rash areas morning and night for several days.  The scrubbing action felt very nice on the rash, but immediately after application my rashes appeared redder and more numerous then before, probably due to the irritation of the micro-beads.  The homeopathic anti-itch ingredient in Tecnu Extreme Poison Ivy Scrub worked well for a few hours after the scrub until the itching sensation returned once more, with a slight vengeance due to the irritation of the scrubbing and the drying of the skin, probably.

The application of Tecnu Extreme Poison Ivy Scrub increased the time needed in the shower by 15 minutes or so, because I had to scrub each area with a marble sized bead and then rinse.   The necessary extra shower at night also added time spent rubbing my poison ivy.  Because it still itched a couple hours after application, I also used much time rubbing coconut oil into the rash to sooth it.  Overall, I used many good hours applicating various substances onto my poison ivy.

So what do you think is the ending of this story?  Is it a happy ending, a sad one, or questionable with no solid conclusion?

My poison ivy did clear up, but it was because of Prednisone.  The day I swallowed those 60mg of prednisones I found relief within a few hours, but because of it I am a man who is either half-awake or half-asleep and never all of either.

I liked Tecnu Extreme Poison Ivy Scrub because of the hope it gave me with each application.  It didn’t have any bad side effects like Prednisone, but the only good effect seemed to be the hope.  But who knows, maybe my ivy would have been much worse at the start had I not used Tecnu Extreme?

My recommendation is to try the stuff yourself.  I think it has different effects on different skin types.  It did not work for me, nor for one of my friends, but for my other friend it worked perfectly.  “It dried right up and went away!“, she said.  You can only try it to know.  If I were you I would order some from Amazon for about $9.  Just tag it on to the end of your next order, so that you’ll be ready.