I do not want to debilitate anyone or prevent them from fishing.  I am not saying that regular fishing is ineffective or that it’s not even sometimes enjoyable.  I like to fish with a spin rod in certain conditions, i.e. when there are no fly rods available, or when I am trolling for fish from the back of a cruise ship, yacht, or smaller vessel.  Some types of fish don’t like to eat flies.  That’s ok, there are other things you can put on your fly rod.  But don’t worry, most fish like to eat flies.

The bottom of a spin caster fishing rod.

Ok, down to business.  You’re waiting for a comparison between fly fishing and regular fishing.  Regular fishing uses a spin rod, which is pictured to the right.  I sketched one quickly from memory and my picture is almost completely accurate.  You’ll notice that the handle is below the spinning mechanism.  The line, which is just thin monofilament,  wraps around a spool in the spinning mechanism.  There is either a button you press or a little bar that you flip to release the line.  If you swing the rod forward and release the line at the right moment the thing on the end of the line will go really far and land in the water somewhere.  If the thing on the end is a live worm on a hook, then you just have to wait around for a fish to smell it then bite it.  If you’ve got a lure on the end then you can reel it back in at varying speeds to try to attract the attention of some fish.  In summary, you cast then reel, or cast then wait then reel.

Anyone who has tried the regular method knows that the really fun part is flinging the lure or bait into the right spot.  Sometimes you just want to fling it really far out, and other times you want it to go between some stumps or lake-weed.  The fun only lasts a moment, though, and then you’re back to waiting for a bite or spinning it back in right away.  The time spent casting is probably only 4% of the total time spent fishing. 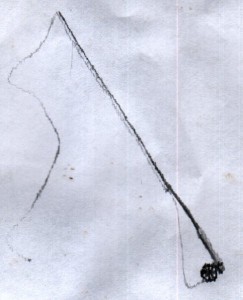 Fly fishing increases this ratio drastically, and even improves the quality and enjoyment of the cast.  I know, it seems impossible, but it’s true.  First of all, let me explain the setup of the fly fishing rod.  As you can see to the left in the drawing of a fly-fishing rod, the handle is made of cork and is placed above the reel.  The reel has no “release” button.  Instead, the fisherman must pull out the line manually with the hand that isn’t holding the nice cork handle.  As you can see from the picture, the line is much thicker than that of the spin caster rod.  It is so thick, in fact, that its own weight is enough to cast itself.  That’s why you can just put a comparatively weightless fly on the end of the line and still cast it around.

So how does a fly-fisherman cast the line without a release button?  Does he just pull out a heap of line and then fling it in the right direction?  No!  Would there be any finesse in that sort of casting? No!  Could he feel very good about himself, or would he enjoy fishing all day long if that were his method?  No!  No!  Would that even work?  Forget about it! To cast out the line he instead must fling out a little of the line, holding back the excess line with his free hand.  Before the line touches the ground he has to fling it back behind him, letting out a little more line.  Then he flings it forward, then back, and so on, letting out a little more line each time, all without touching the water, until it is long enough and he gives it one final flick, and the fly truly flies out far away into the water.  It is verily a majestic process.

Have you ever seen a person with a basketball shooting hoops again and again, each time trying to work on his technique and improve it ever so slightly in order to drop the ball properly into the basket?  Have you ever tried archery or knife-throwing, and found the temptation to hit closer to the target was too strong to resist another attempt?  I tell you that fly fishing is the same.  At the finality of each cast it is as though the rod and line are begging you, pleading with your arm which is holding the light cork handle, to fling it back up into the air and try the majestic flight of line and fly again.

The challenge and fun increase even more when fishing in a moving river, which is when fly fishing is usually utilized.  The fisher must cast his fly in a certain location and wait for it to float over his target area.  Then, instead of reeling in the line, he must skillfully fling it out of the water, and, in order to place it back to the beginning of his target area, he will have to fling it back and forth in different directions around him, so that besides reaching the right length, it will also achieve the correct angle.  It is more challenging than basketball, less linear than archery, and the reward at the end could be a fish. 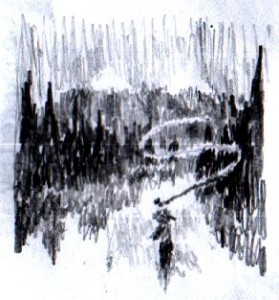 A fly fisherman in a typical setting. Notice the flowing river, the pine trees, and the snow-capped mountains.

Something else to think about is where you will be doing your fishing.  If you are fly-fishing, you more than likely will be going to a refreshing fast moving river.  There will be slippery stones, little waterfalls, bubbling brooks, and probably lovely snow-capped mountains and plentiful scented pine trees.  The fish that you catch will be large and tasty, easy to clean and eat, like Silvers, Dolly Vardon, Rainbow Trout, or Salmon.  Have you ever seen the side of a rainbow trout?  It’s beautiful, a spectrum of colors, as you can see in my drawing of a trout above. 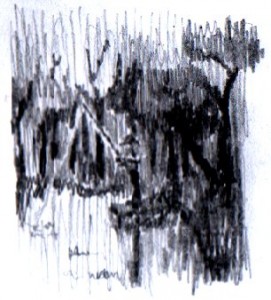 Yes, it is disgusting, he's fishing in a swamp with a spin-casting rod. He just got bit by a chigger.

But if you are fishing with a spin caster rod you will most likely be in some sort of little lake or pond.  There will be pond scum piled up along the down-wind side of it, and water weeds will be reaching up all along the shore to wrap your hook.  The trees will be crooked and full of snakes, and the grass around the edge will be overgrown and covered with ticks.  The other people at the pond will probably be drunk and will get too excited about small catches.  If you manage to catch a fish instead of twigs and soggy dead leaves, at best it will be a difficult-to-clean bass with only average-tasting meat.  Otherwise you’ll get a spiny blue-gill or a tiny croppy or sunfish, with more bones than meat.  Or maybe you’ll get a cat-fish, which are the giant floating worms with whiskers that eat scum and excrement from the bottom of the lake.

Oh no, don’t expect me to go regular-fishing anymore.  Once a man goes fly-fishing, he only uses a spin-caster rod to be polite, because he takes no pleasure in it or its ways anymore.  But don’t worry, spin-casting fishing is ok too, if that’s all you’ve got.

What to do if You’re a Spin-Casting Loser

There’s a really great fly-fishing rod, reel, and line setup that Cabela’s puts together.  The parts are made by different brands and Cabela’s just combines them for you and gives you a good price.  I would get the 9 foot four part rod, so it will fit into your suitcase when you happen to head to some place with a stream.  There’s also the slightly cheaper Cahill Fly Rod and Reel Outfit from Cabelas that looks great for beginners. Don’t worry, you can also use it in lakes.  Haven’t you ever smashed a horse-fly then thrown it onto the surface of the water?  It doesn’t last long before some fish snags it from below.  That’s how it will be on your lake when you use a fly-rod.  Then you won’t have to use that tangled mess of a spin rod any more.