It's Ok to Wear a Lifting Belt 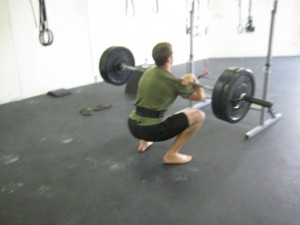 He is wearing a lifting belt.

I walked into another gym.  I saw a man doing curls with 80 pound dumbbells.  His veins were bulging from his biceps.  He was looking into the mirror.  He was wearing a lifting belt, too, but it was about two inches thicker around the backside than the frontside.

That’s not ok, I told him.  His face turned redder. It’s ok to wear a lifting belt, but only ones that are the same width all the way around.  If you wear one with a thicker backside, then you don’t know what a lifting belt is for.

He was upset.  He screamed.  I left him and walked down the road.  I saw a landscaper bending down to pick up a fifty pound bag of dirt.  He was wearing a lifting belt.

That’s not ok, I said to him.  It’s ok to wear a lifting belt, but not for light-weight stuff, only for 80 percent of your one rep max or more.  How much does that bag weigh?

But he didn’t answer.  He just sneered.  I was sorry for him.  I wanted to help him, but I had to move on to the next gym.  It was a “Elite-Fitness” gym.  People were doing some heavy clean and jerks.  They weren’t wearing a belt.  I spoke to one of them.

It’s ok to not wear a belt, I said, but if you want to achieve your maximum potential, you should train with a lifting belt.  I pulled out my Harbinger 4″ Nylon Lifting Belt.  It’s a great belt for beginners.  It’s cheaper than $20 and works well.  Try this on.

He put it on.  He wrapped it around his waste, above his hips and below his ribs, tight like I told him to.  He tried a clean and jerk.  It was a heavy one.  That was easy.  Yes, it was.  Now try again, but add ten pounds.  That was really hard, but my back didn’t get hurt, he said.  That’s what happens.

Hey, don’t wear a lifting belt, his friend said to us.  He was a strong man.  It’s better to be natural–the lifting belt will be a crutch, he said.  It’s not a crutch, I told him.

But he wondered if it helped you lift while you wore it. Yeah it does.  It trains you to keep your lumbar straight, I said to him.  It keeps you from leaning forward on front squats, back squats, dead-lifts, and thrusters,  He wanted to know about overhead stuff.  It keeps you from bending backwards on presses and jerks.  It’s much harder to tweak your lower back on those lifts when you’ve got a belt.

He thought it sounded great.  I’ll let you borrow my Harbinger 4″ Nylon Lifting Belt, I said.  I wasn’t going to be using it over the next week.  When I came back, even the instructors were using belts.  I looked at them and they nodded at me.

It really is ok to wear a lifting belt, I said.