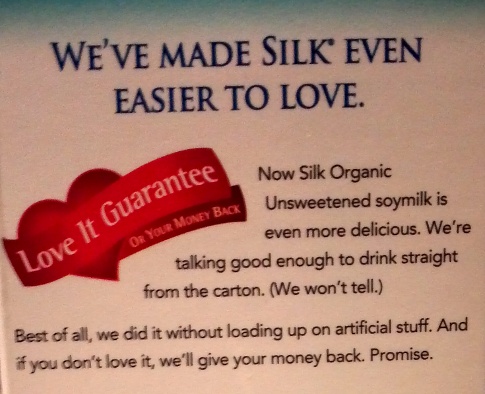 One of the first things you’ll notice when you read the picture of the label on the side of the new Organic Silk Unsweetened Soy Milk is that they’ve made Silk even easier to love.  They could have done this in several ways, i.e., by reducing the price, by including uplifting words of encouragement on the packaging, by enhancing the flavor, or by telling you they have made it taste better.  They have chosen one of the latter two methods, but which one is correct?  Did they really enhance the flavor, or did they just tell you that they enhanced it, and really they added nothing but the flavor of your expectation?

My Soy Milk friends, I am here to tell you that they really did enhance the flavor.  I was a skeptic.  I never liked Soy Milk because the strange and subtle disgusting flavor that marched around your mouth and haunted the back of your tongue from the depths of your stomach.

But things changed one day when I tried Silk’s Organic Unsweetened Soy Milk.  I had it on a bowl of Barbara’s Oat Squares.  Normally, I included blueberries with the soy milk to help mask the flavor.  Sometime during a refill of that time of cereal consumption I realized that I didn’t need the blueberries.

Then I read the label:  “We’re talking good enough to drink straight from the carton.”

Really?  I got out a cup and poured myself an inch.  I drank it.  Where was the soy flavor?  It tasted almost like a pleasant vanilla ice cream.  The label was right.

But what sort of thick-flavored chemicals could they have put in to mask the soy?  I looked at the side: 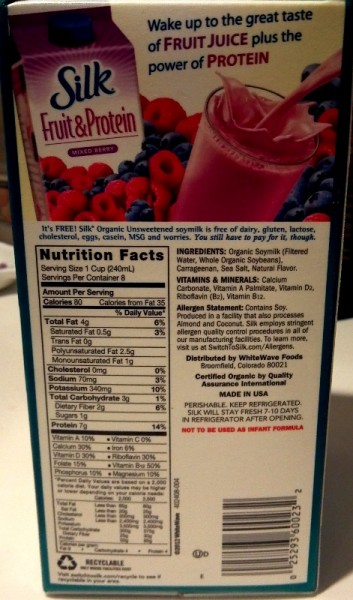 I now believe that the purity of the Organic Soy Beans, mixed with Natural Flavor, allow for the crisp vanilla flavor.  Who knows what the Natural Flavor is?  All we know is that it’s singular, and its a trade secret.

Let them have their secret.  They gave us this new silk. 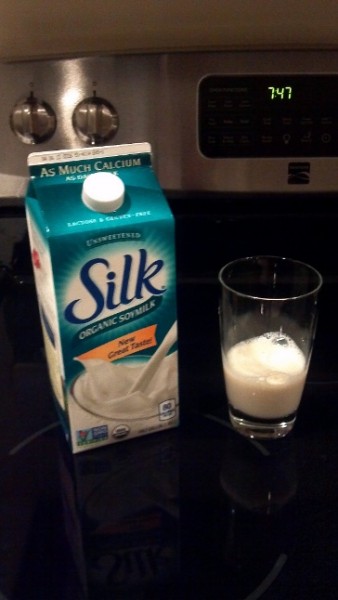