A little company that I had never heard of, called Strike Mvmnt, emailed me one day about sending me a pair of their shoes.  I looked at their website and immediately, like a true ideologist, I found the heel-raise for the shoe and saw that it was 3.9mm.  I only wear zero-drop shoes, I said to myself.  I don’t want them to send me these shoes because I’ll have to give them a bad review, and then they’ll think I’m a real jerk.  Plus, I’ll never wear the shoes and it’ll be a real waste.

But, they did look pretty cool, I thought.  Maybe I could wear them a couple times to workout, and then for fashion.

I had just written an article called Why Wear WeightLifting Shoes in “Elite-Fitness”, so I knew that having a heel-raise during lifts could be advantageous, especially when you have to squat under it, so I thought maybe they’d be good for Oly lifts.

Maybe I’ll just get the shoes.  They look pretty nice and I can always say “if you like a heel-raised shoe then these are for you.” 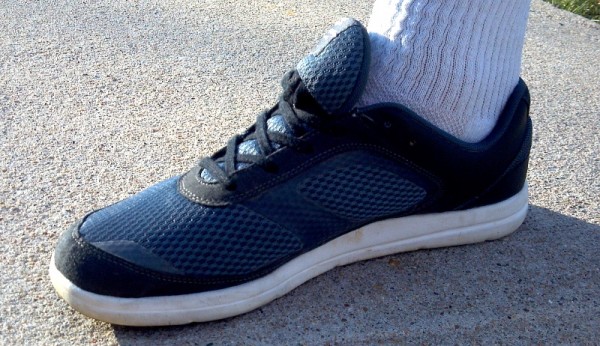 They do look very nice. 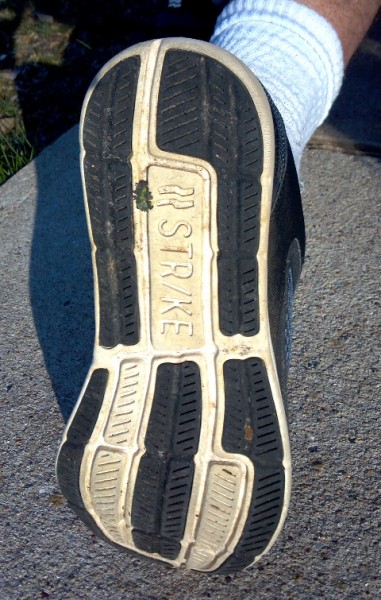 The white part is just foam and the black is some serious rubber, in just the right places. The green is a bit of squished clover.

The first thing you will notice when you order a pair and they arrive is just how light they are.  They look like a normal shoe, but they are as light as a barefoot-style shoe.  If you look at the tread, you’ll see there are black rubber strips in the middle and on the edges, but in between there is an expanse of light white foam.  The rubber is for grip and to prevent wear and the white foam is for padding.

They recommend buying Strike Mvmnt’s one size down from what you usually wear.  I normally wear 13, so I got 12’s, and they fit perfectly.  There is no extra room, nor is there need of it.  The shoe is shaped with a wide forefoot box that fits the shape of my foot perfectly.

The cushioning on the shoe is profoundly comfortable.  After having walked and run the earth using minimalistic shoes with no padding but a rubber slab, these shoes feel truly like I am walking on a dozen compressed synthetic nano-feather pillows.  I had forgotten how springy can be your step when you’ve got a little bit of padding to cushion your landing.  I felt like I could run around, jump off of stairs, and kick hard things, all without bruising the bottoms of my feet.

For about an hour or two I thought it was annoying.  Then I started to get used to it.  As much as I like zero-drop shoes for forefoot running, it really is easier to walk with a little bit of a heel.

So, the shoe passed the wear-around-the-home test.  It passed it very comfortably.  In fact, I was wearing them around like slippers.

But what about in their intended environment, working out at high-intensity?  Would the heels be too cushy for stable lifting?  Would the heel-raise prevent proper forefoot running? 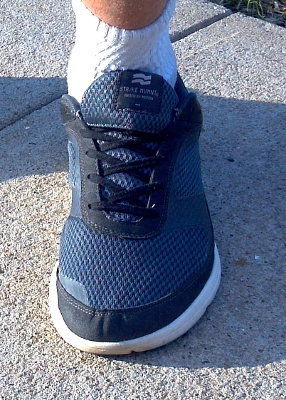 You’ll notice the looping laces are absent, occluded away in the little tongue pocket.

The Strike Mvmnt’s cushy sole is actually amazingly stable and provides great response and tactile feel.  I did all sorts of oly lifts in these shoes and found the lifts to be much easier than in bare feet or in zero-drop shoes.  The padding is really helpful for the lifts where you drop under the bar and slap your feet on the ground.

Even doing a standard air squat was much easier.  Something about having a raised heel really helps pretty much every movement except for running.  Double-unders and box-jumps were handled easily as well, all without the normal irritation to my ankles from the jolting landings.

Running was easy enough in my Strike Mvmnts.  I really didn’t have to change my technique for fast running.  For slow running, I like to land with my real-heel almost touching the ground, so the shoe’s heel would get in the way.  So I wouldn’t wear them for long distances, plus I wouldn’t want to wear them out.  But, they are great for your typical fast 400-800m runs.

There’s also a pretty slick feature, which is a little pouch on the tongue of the shoe.  You can stuff the laces in there and they actually will stay there for days and days.  That way they don’t get in the way when you jump rope or flop around when you run, plus laces just look sort of dorky.

The only thing I wouldn’t wear these shoes for would be rope-climbing.  The uppers are soft and would probably get torn up pretty quickly, which would be tragic, considering how nice these shoes look.

I wear them everywhere and with any outfit, and people say things like “nice shoes.”

These Strike Mvmnts have seriously converted me from a zero-drop minimal shoe wearer to a slightly-raised-heel and cushiony sole wearer.  I didn’t know they could make a shoe that was so light weight that still looks and feels like a full-featured, supportive shoe.

I really do wear these shoes around everywhere right now because they are so comfortable and they look great.  I even clean them off and wear them to formal events.

They are also pretty cool just because nobody else I know has them, so I’m finally unique.  Let’s all join me in being unique and very happy with our shoes by buying Strike Mvmnts.